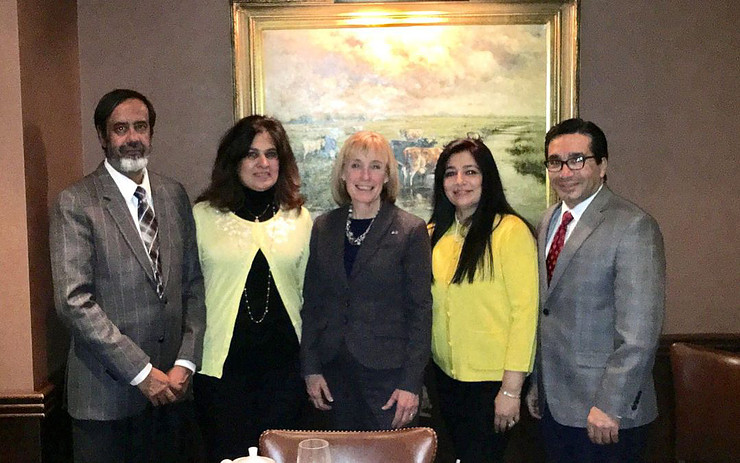 After her first full month in Washington our new Senator Maggie Hassan joined my wife, Romana, and another Granite State Pakistani American couple, Tariq and Tanweer Rahman, for an informative and stimulating dinner discussion. She sits on the Homeland Security Committee and while we hoped to keep the discussion light, we could not help but turn to policy and politics.

Earlier in the month, Senator Hassan used her questions during the confirmation process of Secretary John Kelly to discuss ways the Department of Homeland Security can constructively engage Muslim Americans. She received a pledge from the new Secretary that he values the importance of this dialogue.

We also discussed how grateful we are that her senior Senator, Jeanne Shaheen, used her questioning during the confirmation hearing of Rex Tillerson his thoughts on a “Muslim ban” and “Muslim registry”. We are encouraged that our two Senators will embrace the Article 1 powers of the Constitution using maintaining checks and balances on the Executive Branch.

PAKPAC provides a platform where we can be advisers to our elected leaders. It is through PAKPAC that we not only have access, but that we have the most effective influence.

Congressman Joe Wilson, a South Carolina Republican leader on the Foreign Affairs and Armed Services Committees and Congresswoman Grace Meng a New York Democrat on the Appropriations Committee, joined over 75 Pakistani American leaders from across 15 states today. Community leaders gathered in Washington to welcome the new Congress in what has become a biennial tradition for PAKPAC. The inspiring day included a community town hall where we discussed how a PAC functions and policies we can expect in the year ahead. The night concluded with bipartisan Senators and Congressmen visiting with community leaders for dinner and inspirational words about the importance of activism in these uncertain times.